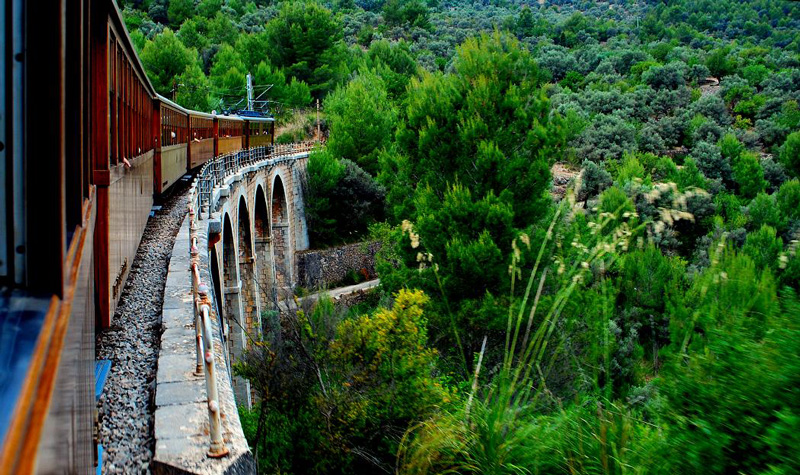 The Sóller valley is in the Serra de Tramuntana, on the Western coast of the island of Majorca, and borders the municipalities of Deià, Bunyola, Escorca and Fornalutx. The municipality includes, besides the town of Sóller, other hamlets and villages such as Biniaraix, S’Horta, S’Alqueria des Comte and Ses Argiles, together with Port de Sóller. However, these areas have merged as a result of urban growth in the valley over the past 60 years. Currently, the municipality has more than 14,000 inhabitants.

Due to its orographic location, Sóller would always be isolated from the rest of the island’s towns and villages and, especially, from Palma. The turn of the 20th century is a key moment in the industrial development of the valley. An important event took place in 1912, with the opening of the Palma-Sóller railway. A year later, in 1913, it was the turn of a tramway link between Sóller and Port de Sóller. Nevertheless, the connection with Palma wasn’t complete until 1997, when a tunnel was inaugurated, hence favouring an important increase of the population.

Sóller has always fascinated travellers and intellectuals, who have visited Majorca since the end of the 18th century and, especially, at the beginning of the 19th. That was the case of Jean-Joseph Bonaventure Laurens (1801-1890), Josep Antoni Cabanyes i Ballester (1797-1852), Joan Cortada i Sala (1805-1868) and Archduke Ludwig Salvator of Habsburg-Lorraine (1847-1915), who wrote: “Sóller is, certainly, the island’s most beautiful town and I have no doubt in asserting that it is one of the most beautiful towns in the world, because everything is assembled in it (…)” The Austrian aristocrat hosted, during long sojourns on the island, artistic and literary celebrities, such as Catalan painter Santiago Rusiñol and writers Miguel de Unamuno and Jacint Verdaguer.

Sóller is home to rich artistic heritage, the most important part of which is probably related to early 20th century buildings. Thus, the façade of Saint Bartholomew church and the Bank of Sóller, together with some mansions, are must-see visits to understand local art nouveau. Carrer Lluna is one of the most trodden streets. It leads into Plaça Constitució and reaches S’Alqueria des Comte. It has been, from time immemorial, the main commercial street in town, the place where most shops would be established, where landed families would have their town homes, –for instance, the owners of Monnàber or those of Moncaira– and where we find some of the mansions built with the money from emigration, such as Can Maçana and Can Moiana, both in colonial style. Can Prunera lies on that street, one of the most trodden in town.